The final stop of our Kenya Safari was three glorious days in the Masai Mara. It is here that you will see all the big animals of Africa and you’ll witness some of the most beautiful sunsets on the planet.

The drive is a long and bumpy road from Nairobi to the Masai Mara and if you have the opportunity to fly there, we recommend you do so. We however, suffered through a very rocky ride that seemed to last forever. Our guide Makau told us that the road is much better these days as the Chinese are working on fixing up transportation all around the country. Who knows, maybe by next year it will all be smooth sailing.

We arrived at Keekorok lodge early enough to have some lunch and take a break before our first sunset safari in the Mara. Keekorok is the first resort in the Masai Mara and it is located right in the heart of it all. The airport is only a few short km away and the likes of Prince Charles, Paul Simon and Carrie Fisher have stayed here.

In its day, it was the place to stay in the Masai Mara. The mara was the first great place in Africa to go on a wildlife safari and dignitaries and celebrities flew to Kenya to catch a glimpse of the big 5.  Today Keekorok attracts package tourists where they serve buffet dinners and nescafe coffee on the outside terrace at tea time. The entire feel is that it is trying to be a luxury lodge, but it hasn’t quite moved on with the times. 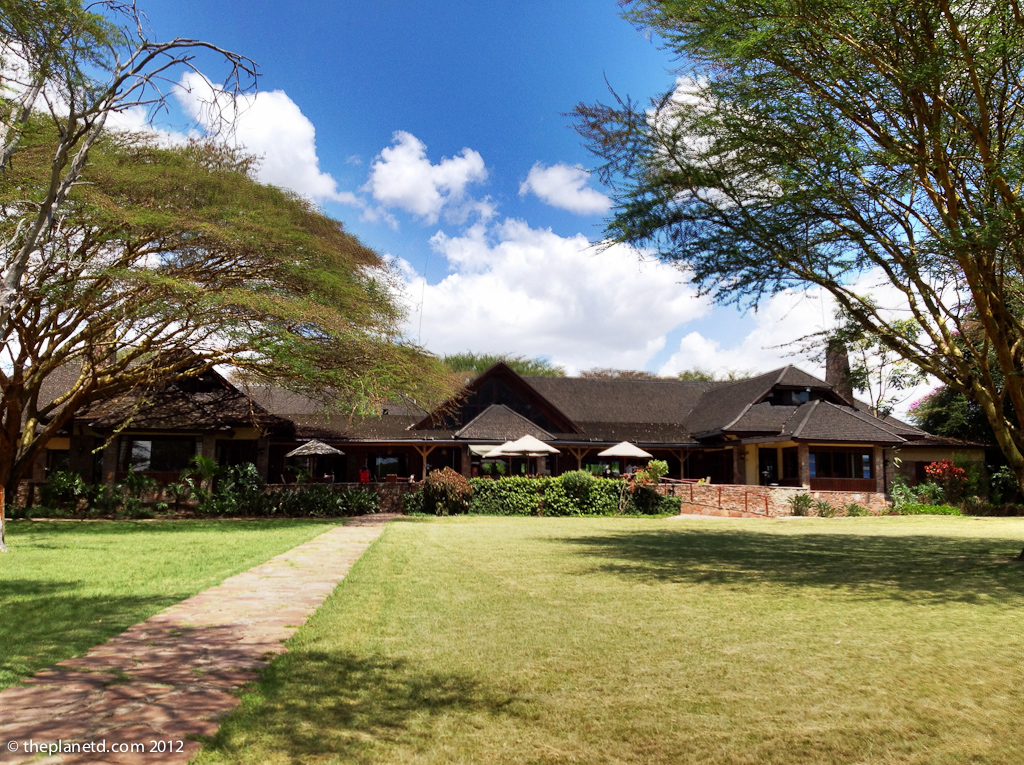 That’s not to say we didn’t like Keekorok, but I had visions of staying in a tented camp surrounded by wildlife rather than a concrete complex sorely in need of an update. Keekorok isn’t hurting for business though, every package tourist from the emerging Asian market seems to book their tours at this hotel.

It doesn’t really matter where you stay in the Masai Mara because you spend most of your time out on game drives. We spent early morning sunrises and late evening sunsets out on the African Savanna searching for all the wild game we could find in the heart of Kenya. We hopped into our safari van and spent hours keeping our eyes peeled for wildlife. It’s all out there, you just have to pay attention. These animals are made to blend in with their surroundings and if you blink, you may miss an amazing opportunity.

Cheetah on a Hill

Cheetah Chills on the Masai Mara

Our first outing on the Masai Mara brought us to a cheetah sleeping on a mound of dirt. It didn’t seem to have a care in the world as the safari vans pulled up beside it. The Masai Mara has strict rules not to go off the path so vehicles can’t get too close to the animals. Between Dave’s ultra zoom 500 mm lens and the close proximity of this mound of dirt, we managed to capture some pretty amazing shots of this cheetah.

He looked back at us in a relaxed manner and then continued to ignore us. Another vehicle came along and refused to turn off his engine. I was so angry. That loud engine was really disrupting the cheetah, I can only imagine the anxiety it was causing. The driver told our guide (after I complained) that he had a battery problem and couldn’t turn off his truck so we all suffered, including the cheetah. Within a few minutes the cheetah had enough and was up and walking away.

We followed it for a bit, but soon we decided to move on as he went further and further from the road.

On our way back to our camp, we ran into another driver who told us that some lions were sleeping close by. We made it just in time to catch a glimpse of them before the sun started to set and we were feeling pretty stoked about the days ahead. We’d only been in the Masai Mara for a few hours and we already saw a cheetah and a pride of lions.

We couldn’t stay with the lions for too long because we had to get back to camp before the sun completely set as park rangers check tourists in as they return from safari. It’s a dangerous world out there on the Mara and if someone has a break down or don’t make it back to the lodge by dark the search parties are sent out. Your in big trouble if you return late from your game drive.

On our way back to camp, we witnessed the most spectacular sunset we had ever seen. We’ve had the privilege of watching many beautiful sunsets in our life, but nothing compares to an African sunset and this one took our breath away. As the sky lit up like a burning flame, a herd of elephants walked towards our vehicle. We were directly in their path and as they glided silently through the long grass, I felt my heart well up with emotion. This was the most beautiful moment I had ever experienced in my life.

Elephants Walk Towards Us at Sunset

The elephants drew closer and the sky exploded into even more vibrant hues of reds, orange and yellow. We had to get back to camp or they’d send out the park rangers, but even our guide Makau couldn’t pull himself away. The elephants continued to walk towards us and the entire herd passed within a few metres of our truck. They seemed to be in a trance, walking deliberately yet relaxed. They moved as if gliding over water. It was silent, it was magical, it was Africa.

This site uses Akismet to reduce spam. Learn how your comment data is processed.